Richard Brautigan: Stories in His Style

The original stories by William Hammett on this site are extremely short and exhibit the elusive, surrealistic quality of Brautigan's short story collection titled Revenge of the Lawn.  They range in length from one sentence to a few paragraphs.  Taken together, they represent brief slices of life and random details that hint at much larger themes.  The plots of the stories are drawn from average people going about their daily business, the idea being that the more important truths about life are found in everyday situations.

The surrealistic quality of some, though not all, of the stories, reflects the author's belief that the ordinary situations of life are doorways to deeper, mystical aspects of human existence.  They also reflect the author's abiding interest in quantum physics and the idea that perception, to a large extent, governs the outcome of events.  This relationship between perception and reality was also an ongoing theme in the work of Brautigan, although the relationship was usually expressed a polarizing tension in his novels.

Such extremely short fiction is now generally referred to as flash fiction, although the term was not in general use at the time Richard Brautigan wrote his many short stories that were eventually collected in Revenge of the Lawn.  They were simply called short stories, which was part of the attraction to readers in the 1970s.  Garrison Keillor, author and host of A Prairie Home Companion, wrote a piece in the New Yorker in 1972 called "Ten Stories for Mr. Brautigan and Other Stories."  The ten short stories were eventually published in Keillor's 1981 collection of stories called Happy To Be Here.

Hammett's short stories, of course, are first and foremost, intended to entertain.  A list of these stories may be found in the sitemap below or by clicking on Index of Stories by William Hammett.

William Hammett is the author of several novels, including The Ghost of Richard Brautigan, a satirical novel using the short chapter format of Richard Brautigan's novels.  A link to the novel at Amazon can be found in the right sidebar of this site.  Hammett is also the author of numerous poems and short stories published in respected hard copy literary journals around the country.

This site is devoted to short stories--what some might call flash fiction--in the style of Richard Brautigan, the counterculture icon from the 1970s and 1980s who wrote novels, short stories, and poems. Consult the index for a complete list of stories by William Hammett featured on this site.

The Ghost of Richard Brautigan 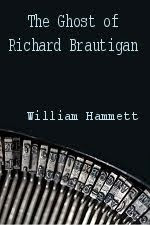 THE GHOST OF RICHARD BRAUTIGAN is a novel using the short chapter format of Richard Brautigan in his many novels. It is quirky fiction in the style of the inimitable 1970s iconic novelist, poet, and short story writer.